How to Convert an Android App to iOS? 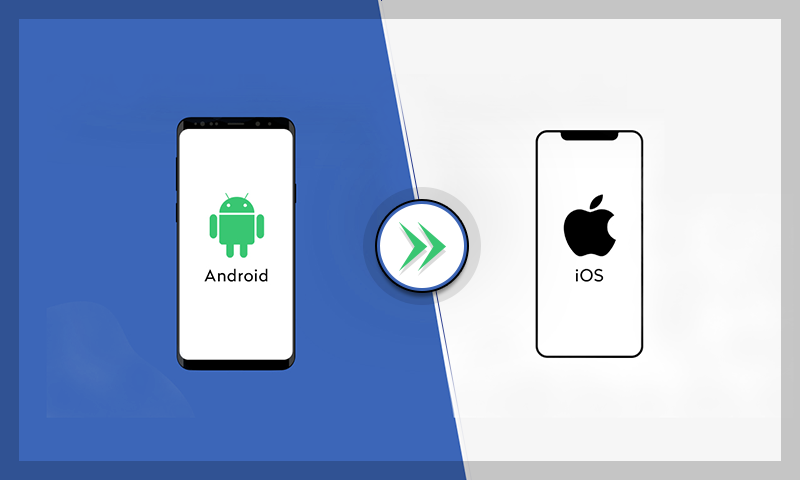 Android and iOS are two different worlds and they both have different features and benefits to offer. As software, both platforms can have multiple types of apps; however, most apps are widely available on Android rather than iOS. As such, it seems imperative that many applications are ported over to iOS for a newer market and different benefits.

It provides an opportunity for businesses to expand their user reach and increase profits for future growth. Having a solid app market grasp is a desirable goal for every company; however, if your app excels on both major platforms i.e. Android and iOS, it is a huge bonus.

Statista found out the total market share of Android vs iOS. In 2021, Android remained the dominating platform with a 73 % market share whereas Apple maintained a 26% market share. The remaining 1% belongs to other unpopular platforms. Therefore, a total of 99% of the entire market share is controlled by Android and iOS alone.

It is also wise for businesses to expand their market and iOS provides that opportunity. Entering the 26% market share is not as easy as it sounds. The competition is stiff and the app market is becoming overly saturated with new apps releasing almost every single day – it is hard to stand out.

Before we look into the steps of how to convert app platforms, let’s find out what you need to consider before you convert Android app to iOS.

Converting app to different platforms requires integration with a new piece of software. For example, if you convert an app from iPhone to an Android platform, you need to adjust many factors that will help the app be easily used in Android. Certain reworks include the app layout, navigation, font size, font style, UX/UI among others.

Once you’re done reworking all necessary elements, your application can have the new look & feel that will be adjusted according to the platform you want to convert to. You can implement any new features on the first platform as well as a bonus.

App developing companies need to ensure that the app they are making results in heavy profits. Ideally, all apps are supposed to do that, however, users are not that interested in spending money on apps. For example, Google Play has apps that run mostly on the free to download model but contain many in-app purchasing options. This provides users an incentive to purchase additional features in the app if they wish to try something other than the basic app.

On the contrary, iOS has a good number of applications that are paid apps which means that users need to pay the fees of downloading the app upfront which usually unlocks complete features of the apps. Now, depending on your business goals, you can choose either of these platforms. If your goal is to get users to pay more then, iOS is the platform for you. Since iOS users are more generous spenders than Android users, it makes sense to place your app on a platform that has users who spend money on apps.

Android and iOS are worlds apart. Apple has successfully managed to create a unique ecosystem that is second to none and Android doesn’t have a solution for that. Even the users of the iOS platform are different than Android users and they are treated as such. Therefore, it is not enough to convert the app to iOS, you also need to have that level of sophistication in the app that matches the iOS ecosystem. Once you develop the app for iOS, it can be used for all the Apple product lines.

Whether you convert iPhone to Android or Android to iPhone, there are some precautionary measures that you need to look into. Let’s take a look at these important concerns:

The android platform uses Kotlin as its official app language mainly because it is compatible with Java and much easier to work around. With constant updates, Kotlin continues to be the chosen language for Google. However, if you convert android into iOS you need to ensure that the app supports Swift language. Swift is a programming language developed by Apple and it is used for all Apple products. For the best app results, it is recommended that you use Swift instead of Objective C or Objective C++ since they will ultimately yield poor results for your converted app.

People often use different operating systems for Android whereas, users of iOS have no choice but to stay updated to the latest iOS updates since the old ones become too slow or unresponsive. It is wise to select the latest iOS version for your converted app since more than 75% of iPhone users are upgraded to iOS 14. However, Android users are very dispersed in this area. Not every user will have the latest OS version. So, if you had to convert iPhone to Android, your OS versions might be less important.

When you convert an Android app to an iOS app, you need to carry out an in-depth analysis of the application and make sure that the app your trying to port meets the standards that are set for iOS. The analysis also contains checking the app’s business logic and matching it with the iOS platform to ensure 100% compatibility.

Further, you need to look into the libraries involved that are provided by the Android app and optimization space for expansion. The backend side for both applications is general which is good since the basic code will not change for both platforms and the business logic layer will remain unaffected.

Having your app on the iOS store is a big deal but it also comes with its fair share of complications. For example, you have to put everything in order exactly as iOS wants you to. To do this, you need a software specialist who can assist in properly completing this important task. You need to decide certain aspects for iOS applications such as app design specifics, functional specification, business logic structure, and source code nuances.

In short, you need a keen technical and business expertise to through this first important step. If you are not experienced in these areas, consider hiring a business analyst and a software architect instead of taking any risk. Lastly, make sure you do a thorough market analysis, review the design and coding, app workflow, functional specifications, and project mind-map.

As discussed, many design elements that are being used in Android applications will be revised and redesigned to make everything work flawlessly on the iOS platform. First of all, you need to carry out native UI mirroring of Android. Don’t simply copy and paste the existing UI to the iOS platform. Android and iOS use different interfaces. You have to carefully adjust the UI to give the app the perfect look and feel.

When we convert the android app to iOS, we need to adjust the font of the application as well. Android and iOS have different native fonts that are unique for each platform. iOS uses San Francisco whereas the Android platform uses Roboto as its native font. However, there is an option to use a custom font on your application which can make the app look exciting. Make sure to use the same font across both platforms for better uniformity. Many big applications have custom fonts and they add to the app’s value.

If your current application supports RTL languages such as Arabic or Hebrew, you can use the UI mirroring to adjust that. LTR languages such as English display the contents to their left rather than right. It is an important thing to remember when you convert android into iOS.

Android 4.2 onwards has built-in support for RTL interfaces and iOS9 also supports RTL languages. This can make flipping the content easier through a standard UI Kit.

The coding process can be a tough one to deal with as you need to rewrite the code from scratch to convert the app from Android to iOS. Recompiling the code is also impossible so we can remove this as an alternative solution. Some alternative tools can be used in order to adjust functionality.

Once you’re done with everything else, it is time to test your app on the iOS platform. Quality assurance is important since it can ensure a good customer experience and make the app error-free. Some of the possible QA tests include usability tests, performance & load tests, functional tests, security and access, and user acceptance.

Hope this guide helps you learn the process of converting your app successfully. Submitting your app to the marketplace is an important step and the iOS App Store has strict rules. It is important to follow all steps correctly and meet the guidelines laid out by Apple. Good luck!

A Step-by-Step Guide to Plan your Minimum Viable Product