Kotlin vs Swift | 10 Most Valuable Differences You Should Know 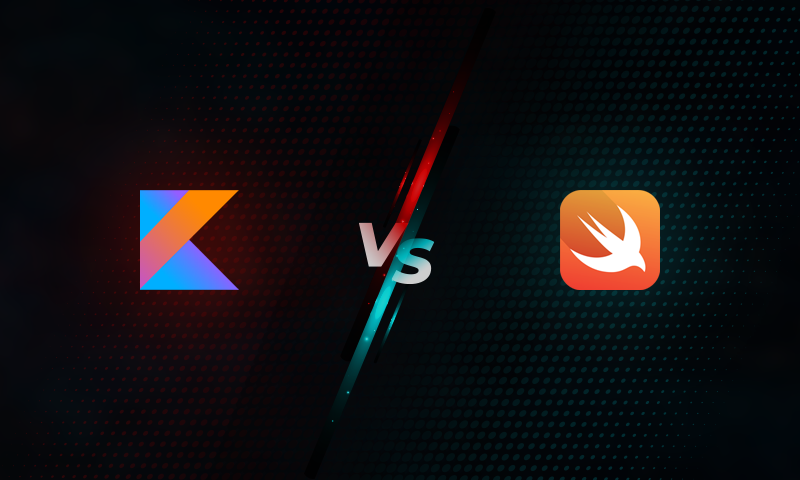 Kotlin and Swift both are preferred languages for android and Swift developers, respectively. The war of supremacy between these two languages has been going on for a few years now. As with Android and iOS, people debate over Kotlin vs Swift to find out which one is better.

Developers were tied up with Java before Kotlin or Swift came. Since Java was much more complicated, the introduction of these new languages was met with great acceptance from the majority of developers.

In this article, we will discuss the Kotlin vs Swift debate and list down the 10 most valuable differences that are important for you to know. Let’s get started!

Android developers used Java as their chosen language since it was user-friendly and helped in increasing productivity. New functions and libraries provided developers with the ability to manage their time well. However, as the technology grew Java couldn’t match the pace which was required. Kotlin started making its name when Google announced it as the official language.

In 2017, Kotlin was made the official language for Android. To use Kotlin properly, developers need an understanding of Java as well. Kotlin is sophisticated in terms of its function and libraries. Coding in Kotlin is also very simple which in comparison with Java is a big step up. Kotlin's productivity tools were the reason why people started comparing Kotlin with Swift.

Whether it is Kotlin or Swift, they both share some similarities; however, the differences outweigh them. Kotlin is mostly believed to be a copy of Swift although Swift was introduced a few years after Kotlin. The accusations are mostly based on certain similarities between the two languages.

In terms of difficulty, Kotlin is certainly easier than Java which had many restrictions such as compulsory use of semicolons. Whereas Kotlin doesn’t have requirements for using semicolons – it is completely optional. Further, the newline character marks the end of the statement in Kotlin which is also different from Java.

When you’re working on Swift, you need to ensure code compatibility since your written codes will be compatible with desktops, servers, phones, and every other device capable of executing the code.

It is a language loved by most developers because programmers can depend on Swift to make coding easier and efficient. Since it uses a modern programming approach, it is generally easier to use and is efficient.

Programmers value predefined methods that help in the Structuring of logic. Swift provides a vast library of such predefined methods. Thanks to the library, writing codes is not as hard as it used to be. Further, code maintenance is easier in Swift as well.

Swift doesn’t follow old programming patterns and large classes since they were more error-prone. Some of the new modern patterns include:

- When the program is started, variables are initialized.

- Memory management is not a hassle in Swift. It uses automatic reference for memory management which helps programmers to avoid writing excessive lines for the same purpose.

- Swift has easy error handling which means that any unexpected errors that arise are handled by programmers effectively and efficiently.

Let’s dive into the key differences between Kotlin and Swift and find out what sets them apart.

Kotlin vs Swift – How do they differ?

The syntax is easy to follow for both and writing codes is simple since it uses modern techniques. Even though both of these languages are specific to Android and iOS, it is possible to use them for different platforms. Developers use Kotlin Native when they want hybrid development. This allows Kotlin to be used on platforms that enable bytecode.

Swift, on the other hand, can be used for the Android platform as well. The Swift compiler allows developers to run applications on Android OS. To make this work, you need a framework that has a compatible UI for the application.

Data class presents a huge difference when we talk about Swift vs Kotlin. In Kotlin, a data class is present whereas Swift does not feature any data class. These data classes are used by developers as a way to hold data.

The standard functionalities and utility functions are also automatically driven by these classes. Impartiality and replication can be implemented through the data class in Kotlin and developers use it often.

Further, prefix usage has another difference. Kotlin uses the $ sign as a prefix along with the name of the variable to return to the argument. Swift, on the other hand, uses brackets and forward slashes instead of $.

Swift allows extensions for additional functionality whereas, Kotlin does not allow adding or altering anything in the code as a default feature. This is where Swift outshines Kotlin since developers get more freedom in terms of extensions.

Error is indicated in a specific way for both languages. Even though the function of error handling is the same, the keywords are different. For Kotlin, an error is indicated through null and Swift uses nil to do the same.

Enums or enumerations are the symbolic names for a set of values. Enum list contains name limitations. Enums are treated as data types and used to create a set of constants that work with variables and properties.

Kotlin does not support the Enum list which is a drawback. During coding, developers might face problems due to a lack of Enums patterns. Swift consists of Enums which allows developers to perform computation properties and other similar values.

Structs for Kotlin and Swift are completely different as well but first, we need to understand what Structs are.

Structs represent value or reference that helps developers easily group a list of variables under one name. When developers modify data through Structs, the modification only takes place on the chosen variable.

For data classes, Structs are ideal since they don’t allow inheritance. Kotlin has similar functions as Java which is why there are no specific Struct types. The fundamental types are passed by value such as int, float, and Boolean whereas, others are passed by preference.

Swift is one is step ahead when it comes to Structs. It allows developers the freedom to choose any Struct which they prefer according to their preferences.

Kotlin uses the Garbage Collection Approach (GCA) and Swift uses the Automatic References Counting (ARC) for memory management. Out of both, Swift has a better memory management technique since ARC is more precise and very reliable compared with GCA.

Annotations are used by developers so they can add metadata to the app code. Swift does not support annotations whereas, Kotlin supports different types of annotations that help in app development.

Tuples are a series of objects that are grouped into one. The objects can be of different types within a Tuple. Consider the following example:

In this example, a tuple of employee data is shown which consists of name, age, and location. Similarly in language, tuples combine a series of structured data with multiple parts. The sole purpose of Tuple is to help developers understand the relationship between different components. Now let’s talk about Tuples in Kotlin vs Swift.

Kotlin has no Tuples feature which is similar to Java. However, Swift allows using Tuples to outline the interfaces.

Every year the tech industry receives a huge boost and it is only going to get better. Innovative solutions bring changes to the market. Kotlin and Swift are the dominating languages for Android and iOS respectively so their comparison makes sense.

The sole purpose of this piece was to identify the differences between these two languages. You can easily choose the language that suits you the best and seems more convenient as a programmer.

10 Most Popular Face Recognition Apps In 2022