Latest UI, UX Design Trends for Game Designers to Focus on in 2022 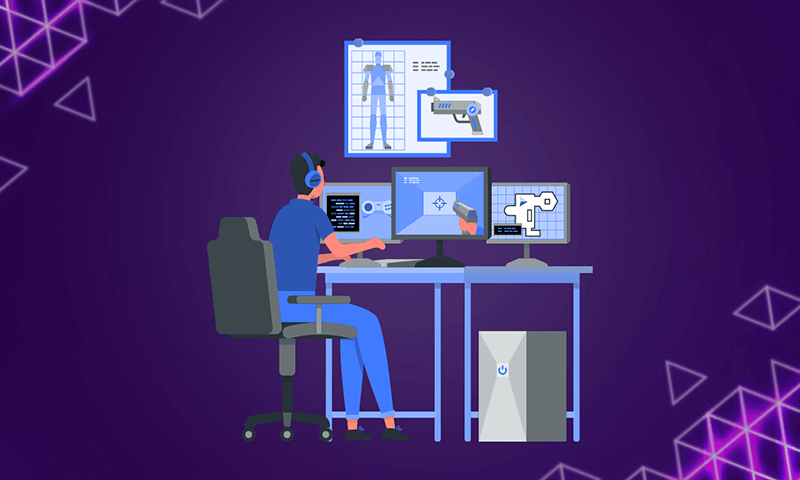 Since Covid-19 became the new ‘normal’ for us, remote work has become extremely important. Working remotely was considered an impossible work style to achieve but now there isn’t another way. As predictability rises every year, every single industry faces new challenges to tackle.

With the pandemic changing of the game everywhere, the gaming industry has also faced a number of obstacles. The game's design, story, and characters are becoming increasingly important to users. As a result, game development companies should now focus even more on these critical factors. Many games were released in 2021, but not all of them became huge successes.

A well-constructed user interface and user experience escalate the conversion rates of websites and applications. There is a multitude of video games on the Play Store, App Store, and websites. Many of them are installed and played by users regularly. That is why gaming companies throughout the globe are putting efforts into the user interface of applications and other design aspects like branding, usability, and functioning.

The conversion rates of websites and applications increase when the user interface and user experience are well-designed. On the Play Store, App Store, and websites, there are a plethora of video games to choose from. Many of them are regularly installed and played by users. That is why developers all around the world are focusing on the user interface of applications as well as other design elements such as branding, usability, and functionality.

Companies must grasp the significance of gaming user interface design. This is an important aspect of the user experience. Furthermore, businesses must provide visually appealing, captivating, and simple-to-use applications that provide consumers with a positive and relevant experience. Every year, though, new and fascinating UX and UI trends emerge.

Virtual reality and augmented reality are increasingly being integrated into digital goods by a growing number of game developers. If this new and improved virtual reality craze takes off, designers and developers will have a greater chance of competing in a saturated market. Modern and updated design and interface tools concentrate on a number of important factors, including:

• Bridging the gap between designers and developers

The above-mentioned trends in the game UI design ease the workflow of designers with the help of modern tools and technologies.

Artificial intelligence integration solves a slew of concerns and challenges for developers and designers. The difficulties were mainly caused by the ease with which design systems could be deployed, remote working, and other issues.

Artificial intelligence, on the other hand, led to the development of new software versions that made the developer's life easier and encouraged advancement in their work. This technology enabled mobile app developers to work more efficiently and effectively.

Usage of Scientific and Design-related Data

Designers may create qualitative yet quantitative visual design concepts that are engaging and tailored using scientific and design data. Additionally, user testing and data analytics aid in the formation and creation of strategies when doing research and developing theories. Data is collected using a variety of tools. However, Google Analytics and Adobe Site Catalyst are the most popular and up-to-date options.

By utilizing machine learning algorithms, generative design has become one of the most popular designs for providing data and information. It's built around a variety of design parameters, inputs, concepts, and experiences. These data-driven gadgets were eventually employed in the creation of design interfaces. As a result, quantitative decisions and designs were not restrained, and iterations were made to the design as more and more ideas came forward.

In the same manner that augmented reality and virtual reality have paved their way into other industries, they have paved their way into art and design. People realized that technology was not just for entertainment during the epidemic time. Using augmented reality and virtual reality, millions of applications and games are being developed.

For interior design and museums, there is interactive travel software. There are also educational mobile game UI design apps that display 3-dimensional artwork and more.

In addition, numerous businesses aim to combine and incorporate augmented and virtual reality into their digital goods. Designers will be able to come up with interesting new opportunities to sell their products and services as a result of this.

Use of material Designing for Website and user UI Gaming Applications

Material design has been used by many developers in a variety of industries for websites and gaming applications. Users across several platforms can execute the ideas by being fascinating and design-specific thanks to this unified and permanent experience. That's great for geography, grids, colors, photos, and other things. For designers and developers, the documentation provides structure and support. That is the most effective way for people to understand how to adopt the design while maintaining the brand's style.

Big gaming corporations, according to recent research and analysis, spend a fortune on user interfaces. Many voice user interfaces, such as Amazon and Siri, are sweeping the design landscape like never before.

Furthermore, speech user interfaces are used in user interface and user experience designs, which tend to show a different aspect of time. A vocal interface is a type of design that allows for voice interaction between players and games without the need for visual elements. It is, without a doubt, a fantastic media that uses artificial intelligence, natural language processing, speech-to-text, and text-to-speech to improve user experiences.

The simple gaming user interface has been popular for quite some time. Users can become overwhelmed by overcrowded designs. It's for this reason that game UX design application developers avoid complications in favor of simplicity. Designers and developers limit the number of colors and elements to keep it as simple as feasible. This new style aims to keep gradients as light as possible. Additionally, those are illustrations created specifically for the minimalistic display.

User interface and user experience in digital contexts are rapidly evolving into fresh dynamics. Designers must also keep up with important information and the most recent gaming trends. The advent of digital media has provided designers and developers with an enormous amount of data.

Among the greatest, the capacity to tell stories around a digital experience will continue to be popular. Typography has created a strong visual hierarchy in and of itself. It plays a crucial role in delivering a fantastic user experience as a key component of the user interface experience. Text formatting alone is no longer sufficient since copywriting has become one of the most important aspects of a positive user experience.

In the coming year, it is likely to keep its ground. While the aesthetic draws customers' attention, the narrative keeps them engaged with a business by making them feel like they are a vital part of the story. This prevents people from skimming the information. As a result, never undervalue the power of UX authoring.

Usability has become one of the most important trends, similar to how pink was once the new black. You may have heard that Google plans to add three new user experience metrics for measuring a website by the end of 2021, including speed, interactivity, and visual stability. They are collectively referred to as core web vitals.

A user experience audit is a tried-and-true method for determining your product's usability and improving its online performance. You can also learn usability testing to have a better understanding of people's motivations and wants. There could be no other explanation for the UI being changed from intuitive to user-friendly but epidemic. If people want to produce something unique, it's preferable to support them to do so.

You may recall seeing this style on old Windows and iOS 7, but it appears to have made a comeback, and by the end of 2021, we will likely see more of it. For numerous reasons, Dribble's glass morphism elements tend to stay eye candy.

A glass-like translucent element, on the other hand, gives a well-defined hierarchy to the user interface nowadays. They usually do this by imitating depth. This makes it easier for people to tell what is on the front and rear of the screen. Despite this, it does not appear to be overpowering. This style is also included in the latest macOS version.

3D has been around for a few years, but 2021 will be the year it truly shines. However, we live in a technologically advanced world where rapid advances in semiconductor manufacture have enabled lower-end devices to handle complex pictures in real-time. As a result, using an animated 3D gaming user interface will no longer be a chore.

Various dynamic features such as logos, images, and messages will flourish on various web pages in 2021. This makes it easier for people to distinguish between different parts. Designers think outside the axis for producing concepts to make them new and fascinating. It might also pave the way for the creation of augmented and virtual reality experiences.

Way too many similar icons

We've all witnessed the major changes in logos and symbols recently. However, many people are dissatisfied with the transformation. The icons used in video game UI design serve a variety of purposes.

They are immediately distinguished from one another, rather than obtaining a new yet similar look. Throughout the day, a large number of users will click and tap on them. They are capable of detecting them in a fraction of a second.

Various graphic editors enable users to create and launch websites. Web Flow is used by one of our designers to build and create new products. Copy folio is a personal website designed to help copywriters build their brands and advance their careers.

It will be easier for people to create unique and creative products in the future instead of seeing the same template on multiple websites. UX/UI designers are known for their inventiveness and originality. While keeping up to date on the technologies and latest UI trends is crucial.

Generative design is another potentially promising video game UI design idea. This is critical in analyzing a large amount of similar data, identifying features and qualities, and then producing new ones depending on the information presented. There are currently millions of algorithm-driven design tools available for in-game UI design that can be used in more practical ways.

This aids in the development of layouts and marketing materials. The result of the neural network settings is controlled by the designers and developers. The major purpose of customized game UI design, on the other hand, is to boost user conversion rates.

Hope this article about the latest UI, UX design trends for game designers for 2022 was helpful to you. As a developer, you need to always keep things interesting and fresh. For gamers, these trends are useful because they help in improving the gaming experience and also keep them engaged in the game.