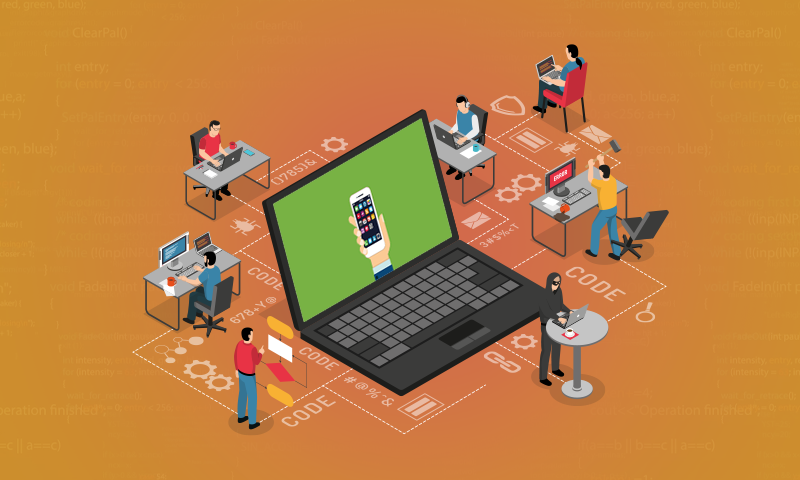 The mobile market is dominated by Android mobiles and it is no surprise that most market share belongs to Android as compared to iOS. You can easily see Android smartphones being used in literally every corner of the world. Android applications are in huge demand as the number of users continues to increase. You can find different platforms that support Android; however, choosing which android programming language to use for your android app development can be tricky.

Why Build Applications for Android?

Android applications have almost everything possible directly from the smartphone, whether it is to text someone, call, order food, shop online, or listen to music, among other things. More than 3700 apps are added to the Google Play Store – imagine the competition to get noticed by users. While there are some things you can do to improve the chances of your app’s success; however, coding on android is a basic part of ensuring your app’s success.

Let’s take a look at our list of android programming languages that provide the most value to app developers while ensuring ease of use and overall effective performance.

Top Android Programming Languages for You to Choose From

Kotlin remains Android’s official language; however, there are several other languages to choose from. We have compiled useful information about these important programming languages so you can pick the one that suits you the most.

In 2019, Google officially announced that Android will be using Kotlin as its official android programming language. Kotlin is now a cross-platform programming language that is mostly used by android app developers as a replacement to Java. Kotlin provides many benefits to developers and solves many problems which were persistent in Java. Java Virtual Machine can be used to operate Kotlin with Java.

In terms of differences between Java and Kotlin, there are few that matter a lot. For example, in Kotlin, Java’s need for ending a line with a semicolon is completely removed. As a result, beginners find Kotlin much more useful and easy to use compared to Java. As such, Kotlin provides an entry point for app development and makes coding on Android easier.

Java used to be the official language for all Android app development until Kotlin came along and became the new official language. Java is undoubtedly used by most app developers for coding on Android. Play Store currently is home to many apps that were made with Java and even to this date, Java remains the language that Google stands behind. Other than this, the biggest advantage of using Java is the huge online community of developers who are Java users. You can get your queries answered in case of any issues. Sadly, you will face certain issues while using Java.

As discussed, Java is not the easiest language out there. Being difficult and complex to use, it is not suitable for beginners to start their app development journey. There are complications with null pointer exceptions, concurrency, constructors, and checked exceptions among others. With Android Software Development Kit (SDK), the complexity increases a lot which might be too much for new users.

Our advice is to start app development with a language that is suitable for beginners. Once you’re comfortable and have enough experience, then move to java to experience the joys of Android app development.

Android Native Development Kit (NDK) is used by C++ for app development. Using C++ is not always recommended since it is much more complex than Java and usually leads to many bugs which add developer’s work instead of making it easier. C++ is good only for specific situations and it cannot be used solely for app development since you need NDK as well.

In terms of setting up, C++ is pretty difficult to operate and much less flexible than most languages out there. The efforts you will put in using C++ and making an app successfully is not worth the effort it requires in return. It is better to opt for other simpler and more useful app development languages instead.

Java and C# share many similarities so C# is also ideal when it comes to app development. Similar to Java, you need to be an intermediate to an expert level developer to use C# correctly otherwise you’ll be lost in complications. Luckily, C# employs the same garbage collection as Java which means that the chances of having memory leaks are minimal.

In terms of syntax, C# is better than Java as it uses a much simpler syntax which makes coding apps much very easy. C# used to work only on Windows OS which was a huge drawback. This issue was fixed by Xamarin and C# can now be used to develop Android apps and transfer them to other platforms.

Surprisingly, native Python app development is not supported by Android. You can still use Python for Android app development. Several tools can be used to convert Python apps and make them run on Android devices.

You can use Kivy to convert apps from Python to Android Packages. Kivy works as an open-source library that is used for the development of mobile apps. Kivy is compatible with Android and is very quick when it comes to app development. However, Kivy lacks the native benefits.

If you want to accomplish basic tasks for Android app development, Adobe PhoneGap would suffice. Except for JavaScript, it requires little programming so it poses less difficulty than most languages for Android app development. Since it is easier, it requires a lot of hard work to create a decent application. Our recommendation is to use other languages in the list if you’re looking for a detailed and effective app.

Dart and Java are two big-league languages that we just can’t ignore. If Java is the most used programming language, Dart is the language that allows the development of beautiful apps within a reasonable time. It is an open-source programming language that uses a flutter framework and allows app development for websites, desktops, and mobile. The best quality of Dart is the ability to save time which is a huge benefit considering other languages.

Another attractive quality of Dart over other languages is that it is offered by Google and allows client-optimized language for fast apps on any platform. Dart features are the reason the language has gained much popularity. Dart improves the UI development process through live changes features known as hot-reload. Developers can make changes as they develop the apps. For web apps, Dart uses JavaScript. For mobile, desktop, and backend, Dart compiles ARM and x64 machine code for faster performance.

Corona uses Lua to develop Android apps. Originally, Corona is a software development kit that is being accepted by developers very quickly. Corona Simulator and Corona Native are the two operational modes that are used by Corona to develop apps. Corona Simulator creates apps directly without any external code. On the other hand, Corona Native requires the integration of Lua code with the Android Studio project to develop native feature apps.

If we compare Lua and Java then Java definitely wins in terms of broad functionalities. Lua is very limited but on the positive side, the learning curve is simple and easy. Through Lua, you can also use the monetization features that can help enhance the experience of app development. Generally, Corona is preferred for gaming apps; however, it can be used to develop all kinds of Android apps.

We covered everything you need to know about top programming languages for Android app development. Our list of languages is not in order of priority or superiority. You can choose any language that helps you create better apps for Android and improves the app development process. Your objectives and preferences will be different for each project therefore, you might need to try different languages depending on the nature of the apps required.

You can create many different types of apps from all the languages mentioned above such as games, calculators, chatting, music, podcasts, etc. All in all, there’s no one language that can be used as the definite perfect one for Android app development. Our choices depend on the project goals and we make the correct choices depending on what we want. Every language will help you improve and grow more as an Android developer.